Born Lola Isabel Iron Crow of a wolf-blooded mother (Charity Longfisher) and her Forsaken father (Tom Iron Crow), Blood Moon Howling spent her earliest years on the Blackfoot reservation her dad had grown up on, poor but briefly happy. Many of Blood’s earliest memories were of her mother and father, laughing and teasing one another over breakfast. It was a vast love she blossomed in.

This unfortunately did not last long. For strange and unknown reasons, her father quickly became a rare visitor in her life…dropping in maybe once a year, for birthdays or special occasions…then disappearing one day altogether.

She adored her father. And while the growing chasm between his company and her life grew from year to year, breeding a deep resentment that exploded when he stopped showing up, she always felt closest to her father than anyone in her family. For reasons she could never quite understand.

Her mother, left without much of a husband, quickly changed into the consummate barfly, hanging out at the local bars, picking up guys and bedding them at a moment’s notice. Blood’s core upbringing came mostly from her gentle grandmother, who doted on Blood like the devoted daughter she never had. Under her grandmother’s guidance, Blood learned pottery, the old Blackfeet lore and to cherish the gentleness within her. She loved that old woman more than life itself.

Eventually her mother decided to wander back into Blood’s life. After “falling in love” with a redneck poker shark and part-time car salesman named Duke Ackerman, she took Blood to live with him and his three other children not far from the reservation. Three more children followed. While she had more material things than ever before, Blood’s homelife in those years was abusive, cutthroat and always aggressive. Duke, as a stepfather, was brutal. He seemed to enjoy tormenting her and encouraged her siblings to pile on the abuse. As a result, Blood spent most of her formative years feeling trapped, hated and antagonized.

Adding to the misery, her mother, cowed by her step-father, seemed to disconnect from Blood the same way her biological father physically had. When her mom died in a car crash, Blood, at 10 years old, felt she had nothing in the world to love her. To care for her. To take shelter in.

When yelled at, she yelled louder. She returned blows, from her siblings or her step-father, fourfold. She was arrested twice (once for trying to poison her stepfather, the other for trying to run him over with a car) and briefly lived in a foster home (a stay that lasted all of three weeks). Eventually she became so maladjusted to conflict and threat, she actively courted it, sought it out before it could surprise her. Dared anyone or anything to push her. The scars on her knuckles were testimonies to her, hard-won guarantees that she, and only she, could keep herself safe from harm.

Between the stays at juvie and the foster homes, she fell in with the Native gangs of her old reservation stomping grounds. Couch-surfing, smoking weed and stealing beer, Blood’s reputation, as a girl not to be fucked with, grew. Her relationship with boys were few and unstable.

Initially, she felt freer than she ever had her entire life. But as the parties became a daily thing and the bottom feeding and inconsistency dominated her waking hours, she found herself determined to seek out something…anything… better.

Eventually she was old enough to leave out on her own (and be arrested as an adult). With only a few dollars in her pocket and nothing to keep her on the reservation, she decided to look up her grandmother. The night before her bus ride to Boulder, under a fat and luminous moon, her auspice turned. Her father, for the first time in 11 years, ran with her that night and opened her eyes to what she was.

Blood has anger issues. The kind of anger issues that have landed her in jail for assault and battery more times than she can count. Having left her step-family and found solace in being a Blood Talon, Blood has moved to Boulder in hopes of being closer to her grandmother and graduating from Naropa with a degree. Eighteen and with a chip on her shoulder the size of a mountain, Blood can jump into a furious rage at the drop of a hat, particularly if she perceives someone she’s close to as being bullied or disrespected. This is a long result of her childhood days and the Native gangs she ran with.

Living near her grandmother has granted her a small sense of peace, as the old woman is a constant source of calm and level-headedness when Blood is beset with problems. But Blood is having a hard time with that. Combat is all she’s used to. When she’s not sparring with her packmates, she’s physically pushing her limits in other ways, having recently taken up wall and rock-climbing to hammer her body into shape.

She is fearless and relentless to anything that opposes her. Often times to her own detriment.

Max Roman, fed up by her recklessness and penchant for violence, has tasked her with helping Peter Boreas explore the Hedge, more to keep her from getting into trouble with mortals than anything else.

Her father on the other hand, Roar in the Dark, believes that she has been put on this path as part of her destiny. A veteran in the fight against Gurdilag, he believes that more and more wolf-blooded in the Boulder area are being taken by the Gentry as revenge against the Shadow Court battle. And that Blood shall be a major help in rooting that menace out. 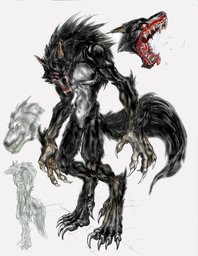