Adele, now Jenn, was never the sort to get emotionally involved. She grew up in Boston with her parents, and received academic instruction from a private tutor during her early years. Her parents were often distant, and as an only child, she kept to herself a lot. Much of her time was spent with her nose in a book, living vicariously through the lives of people who didn’t exist, but seemed far more exciting than hers life was. Her family was fairly well off. Her father (George) sold insurance, and her mother (Ellen) was generally too busy organizing PTA bake sales or attending jazzercise classes to spend any quality time with her daughter. Both her mother and father were proud of her in their own ways, but compensated for their inconsistent parenting by planning out every detail of their daughter’s life, in order to assure her success.

Adele had always wanted to write. Her love of books led to a love of words, and by the time she was twelve, she had decided that writing would be her future. However, because she was often caught up in her daydreams, she seemed disconnected. Ellen felt that an academic life was not suited to her daughter’s traits. As Adele was an attractive girl, even at a young age, her mother decided she would be slated for beauty school. Adele was furious. Knowing that bringing the subject up with her mother was useless, she turned to her father for support. Worried that his daughter would be unhappy with the choice that had been made, George tried to convince Ellen to consider an alternative career for their daughter. In the end, a compromise was made, and Adele was sent to a vocational boarding school in Boulder, Colorado to study literature with the understanding that her level of achievement would determine the course of her career.

It was during her last year of school, when she was seventeen, that Adele was taken. She had become infatuated with a young man named Hans who claimed to be studying in America from Germany. He was charmingly eccentric, a quality which Adele had come to admire from the numerous characters she’d become familiar with in her reading. He too was interested in literature, and regaled her with stories that he said he had learned in his youth, as well as those he had written. Her favorite was a story of a library, one that covered miles upon miles of lush, flower-strewn hills, whose buildings wound their way down the slopes of a tall mountain. Hans told her that this library contained all of the most beautiful writings in the world, and that only those most desirous of knowledge could enter. He would always promise to take her there one day. He kept his promise.

One afternoon, Hans brought Adele to a part of the forest around Boulder that she hadn’t visited before, saying that he was finally going to bring her to this magical place. Of course, Adele didn’t take him very seriously, and wasn’t expecting to somehow stumble upon a marble stairway at the foot of the rockies during a playful game of tag. Stunned, she looked around for Hans, and realized that he had disappeared. Letting her sense of adventure get the best of her, Adele started up the stairs to see where they led. The further she traveled, the more she was compelled to keep going, and before long any thoughts of her home and life had been swept from Adele’s mind. She fell into a sort of haze, climbing for days without rest, strangely energized by the entrancing possibility of what may lie at the top. The stairs continued up for miles, through beautiful lush forests unlike any that should have been growing in what ought to have been the rocky mountains.

Soon buildings began appearing alongside the path. They became larger and more grandiose as she continued. Yet Adele felt compelled to go on without pausing to investigate any of them. Finally, as she ascended the last of the steps, Adele stepped onto a white gilded pathway, which wound toward an enormous building. The structure was marble and gold, stretching hundreds of feet into the air, with spires and delicate bridges connecting outer towers. Through the enormous, pale-framed windows, Adele could see thousands upon thousands of books, and at the entrance to the library was Hans. As though in a dream, Adele walked toward him, then turned and stepped up onto a pedestal into which her name had been carved.

“Now you will be mine forever, pretty one,” Hans spoke, smiling. “All who enter will see your face and hear your voice, but your words will be mine, and your feet will not move. One day, when you are not so fair, I’ll put you back.”

For Twenty five years she stood on the pedestal, watching strange beings amble about in the realm of knowledge that she could not read, reciting prose that her captor had written. Her appearance changed, but her beauty did not diminish. Nevertheless, her spirit pined for freedom. She longed to be free to turn around and even glance at the massive collection of writing behind her, but her body was immobile and her speech forced through her mouth. Slowly, her sense of identity began to wither, and she realized that she would soon die.

Yet, once again, Hans kept his word. One evening, at the last flare of sunset, he returned to her. “I’ll let you go, because your spirit is dying, and a spent flame is of no use to me. But though I spare you, you are in my debt. Be assured, I will one day come back to claim it.” She found suddenly that she could move, and that Hans had gone. Wearily, Adele climbed down the thousands of stairs, this time feeling the journey acutely. After several days, half starved and delirious, Adele wandered into Boulder once again. Terrified of everyone around her, she sought refuge in the only place she had ever felt at home—the library.

Eventually, Adele was able to integrate herself back into human society. She learned that only a few years had passed in the time that she had been gone. Somehow, her parents believed that their daughter had returned to them upon graduation of boarding school four years prior, was now modeling for a chic new clothing designer, and pursuing a career as a new pop star at age twenty. Realizing that her old life had been lost, and determined never to be taken again, Adele changed her name to Jenn. She took up a position at the local library, and integrated herself as best she could into normal, human society. Jenn was eventually discovered by others of her kind, who referred to themselves as changelings. She joined the changelings’ Winter Court, which offered her protection from her former captor.

Jenn no longer feels any measure of trust for those around her. Every choice she makes has become a weighing of options, threats, and uncertainties. Her survival depends on her anonymity, and “friends” are merely those whom she feels share common goals. Her only pleasure in life is her reading, and she is secretly compiling a memoir of her experiences, disguised as only fairy tales, to which she turns when she feels she can no longer bear the burden of fear. She sleeps only when necessary, and her dreams are plagued with endless marble halls and the flitting of a handsome shadow, chasing her in the dark. And although she wakes up terrified and alone, a small part of her feels regret for that lost realm of knowledge.

Adele knows that times are changing, and feels the stirrings of a great unrest in the changeling world. Although she is determined to do what she must to keep herself safe, her fear is extended to those around her who have been similarly mistreated. Whatever events the future holds, Jenn knows that Hans will keep his promise. When that day comes, she will be ready to fight.

Recently, Jenn was able to invest herself in one other changeling, someone who she felt truly held a desire to protect her kind. Despite herself, Jen allowed herself to befriend Eden, an prominent member of the changeling community. When Eden was tricked by her keeper, and killed as his last vicious act, Jen realized again why she does not invest her emotions in others.

However, Eden left a lasting impression. She was passionate about her beliefs, and risked everything to see them realized. Her courage and determination have been an inspiration, and Jen now wonders whether she can carry on that legacy…but she is also determined to try.

In the meantime, Jenn must find something to keep her going. Her big passion is writing and literature, and she has been hiding in her library job for most of the time she’s spent outside of the hedge, but she’s realized now that this won’t protect her. She has also tried not to rely on people to get things done for her, but is quickly finding this to be impossible, as she’s ordered to carry out her tasks in the company of others.

Recently, Jenn has been charged with scouting the hedge for disturbances, and making alliances with those who live there. Jenn also feels she should make the most of Eden’s tragedy by spreading the word of what’s going on to as many people as she can. She has started a changeling publication under a pseudonym in order to alert those in all the courts of what’s going on. This publication is called “The Hedge Gate.”

Additionally, Jenn does not trust Joseph, the mentally scarred war doctor who has been assigned to her task force. His sporadic behavior irritates her, and she feels his presence poses a hindrance to changeling society, possibly even a danger. For this reason, she is going to keep him nearby to monitor his actions, compiling evidence of her suspicion. When she feels she can make a case, she plans on submitting this evidence to the proper authorities. Jenn believes that he is compromising her position as well, by association. Since Peter does not agree with her low estimation of the previous group’s cohesive teamwork, Jenn will try to prove this by using Joseph as the thin edge of the wedge, so to speak. She hopes to bring about a more effective task force that will get the job done with minimal griping and inefficiencies.

As far as Jenn’s social life goes, she prefers not to have one. There is too much work to do, and too many people to deal with. Relaxation is another form of laziness, and it has no place in her vocabulary. However, the burden of maintaining a regular supply of glamor is one which has weighed on her heavily as of late. Therefore, Jenn has taken to frequenting the a support group for those who have suffered the loss of a loved one. She believes it will give her the benefit of acquiring glamor, while at the same time alleviating some of Peter’s fears that she is isolating herself after Eden’s death. 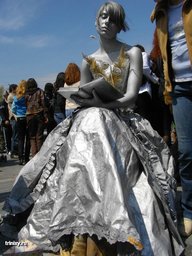