We’ll begin with a reign of terror, a few murders here and there, murders of great men, murders of little men, just to show we make no distinction. – The Invisible Man, 1933

Born in Boulder, CO in 1919, Billy Donovan came from a hardscrabble life, the son of a silver miner and a seamstress. By the time he was 10 most boys his age were following the livelihoods of their fathers; digging out minerals… and occasionally themselves… from the tenuous mineshaft walls. Billy, on the other hand, knew better. His abusive father insisted from the end of a strap that Billy work in the mines but Billy would have none of it. And when a shaft collapse took his father and older brother, Billy gave up on his family and moved to Denver with an aunt.

There he tried to carve out his survival on the streets. When he and his mates weren’t robbing people blind or scamming them to survive, he was in a movie theater, devouring every horror movie he could get into. He adored Frankenstein, Dracula and the Wolf Man. But the one he loved most of all, had memorized by heart in fact, was The Invisible Man. Because that guy didn’t take any shit off of anybody.

After he and his hoodlum pals failed to rob the home of Dutch Gallager (notorious crime boss to the Westie syndicate) and Billy had stood up, iron-willed, to Dutch’s rage, Billy was taken under the wing of the Westie gang. He quickly learned the syndicate business, first as a gofer then as an enforcer and eventually as Dutch’s lieutenant.

But by the age of 21 he was taken into Arcadia. The details remain foggy at best for Billy but he still has vague flashes of a kind of cartoony swing-era world and the stabbing deaths of hundreds under his blade fingers.

When he finally fought his way out through the Thorns and into Denver, the world had changed considerably. Everything looked like it came from futuristic funny books, with silent rounded cars, supersonic planes and phones people could fold and put in their pockets. He found that his fetch had replaced him and had grown to become Boss Donovan, head of the Westie syndicate in Colorado. His old apartment, his old stomping grounds, had all disappeared into strip malls, parking lots and restaurants. He realized he could no longer be Billy Donovan in this world. He had to become Mick Sticker. Autumn Court Denver found him soon after and invited him in.

He made a living as best he could, flitting from shitty job to shitty job. Until he finally decided he wasn’t going to live in fear of who he was. He stormed Boss Donovan’s office and offered the fetch a deal. If he gave Mick a job as button man and enforcer for the Westies, Mick wouldn’t kill the old bastard in his sleep. Taken completely by surprise, Boss Donovan relented & Mick was back in business.

And yet, through all the confusion of this modern era, the only constant Mick could find was in his visits to the old Mayan movie theater in Denver. There he relished all the horror movies he’d grown up with and many new ones he’d never seen before. It was his anchor and his harbor just sitting in those seats, as if the world had never passed him by. It was at the Mayan that he found the proverbial girl of his dreams: Charlotte Mineau, a CU Boulder film student, connoisseur of swing era fashion, and a regular at the theater as well. Dressed in flapper skirts and a Louise Brooks bob, she adored horror flicks – from the work of Tod Browning and James Whale to Wes Craven and George Romero – mostly for the adrenaline rush they always gave her. At first she found Mick creepy and slightly stalkerish. But won over by his mannerisms, his peculiar speech and his insistence on style, she fell for him. They’ve been dating for three months now and though she isn’t ensorcelled or aware of his changeling nature, Mick has been working on a sly pledge with her that might allow him to harvest glamour from her dreams. Which is funny. For all the selfish reasons Mick thinks he stays with Charlotte, she may be the one thing that’s keep him the most human and grounded. His love for her grows with every day.

Mick unfortunately has a knack of being trapped in his past, especially in the way he speaks. More often than not, this gives him a kind of gangster poetry to his words. But there are occasions when the racism his time was comfortable with comes tumbling out of him. Pejoratives like “Chinaman”, “wop” or “darkie”. Charlotte is doing what she can to school him out of this but it’s an old habit to break. When he’s not spending the night with Charlotte and stalling her offers of moving in together, he’s nursing a shot or three of whiskey at Conor O’Neils. 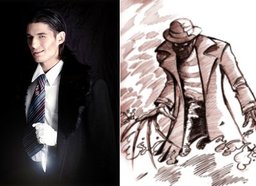